2 Older Friends, and a Younger Friends visit to The Duchess of Cambridge’s Christmas Carols Service at Westminster Abbey

Receiving an envelope with a ‘Buckingham Palace’ postmark stopped me in my tracks. I was so excited and am sure that every person that received an invitation must have felt the same. It was an absolute honour to be selected as the three lucky representatives for The Friendship Project for Children charity, to attend the very beautiful Christmas Carols Service at Westminster Abbey last week.

Our day started in Rugby, travelling together so that we could make the most of each other’s company. Helena’s Younger Friend, M, had never been to London before, so it was lovely to be able to show M so many sights, starting with a tube ride then a nice walk from Green Park. We walked to the front of Buckingham Palace, through St James’ Park, onto Whitehall past the Cenotaph and Downing Street, into Horseguard’s Parade and up into Trafalgar Square. We then headed around to Leicester Square and into China Town for a delicious lunch and to rest our legs a while. We then walked along to Covent Garden which was full of Christmas spirit and fun. And then it was time for us to head to Westminster. We emerged out of the underground station in the shadow of Big Ben, looking over Westminster Bridge to County Hall and the London Eye. As it started to get dark, we continued past the entrance to the Houses of Parliament and then crossed the road and joined the queue for our security searches and ticket checks at 4pm, allowing us a full hour to soak up the increasing excitement outside and then inside the Abbey. There was a real buzz in the air.

Once we entered the main door, we were directed through to the far left of the Abbey, to our seating area in the Great North door section. We thought that we were tucked away behind the side walls of the large Choir section, but hoped that we might still be able to see the dignitaries on the little TV monitor screens dotted around… until we spotted the bright red of the Duchess’ coat through the gaps in the heads right in front of us. The Duke and Duchess of Cambridge were sitting right there, facing us! WOW! To actually get to see with our own eyes, the future King take the first reading during the service was so special. We were even treated to the lovely strong singing voice of Jason Manford, sitting just to our right! Apart from the Duchess we had no idea who else would be accompanying her and so we were incredibly excited to see Prince William too, along with other members of the Royal family, in such a stunning setting, and in such close proximity.

The carols and readings were delightful and we enjoyed holding the service sheets and candles left out on our seats, it made the Abbey feel very welcoming and festive as did the Christmas trees and the reindeers outside the main door. After the service, we were permitted to spend a little time viewing the Abbey and taking some photographs too.

This opportunity was a true honour and we will each treasure memories of our day in London and evening at the Abbey in such an intimate service hosted by our future King and Queen. Thank you SO much for this amazing experience, we are truly grateful. We look forward to re-living it when the service is broadcast on Christmas Eve.

Kathryn, Helena and M (three proud members of The Friendship Project for Children) 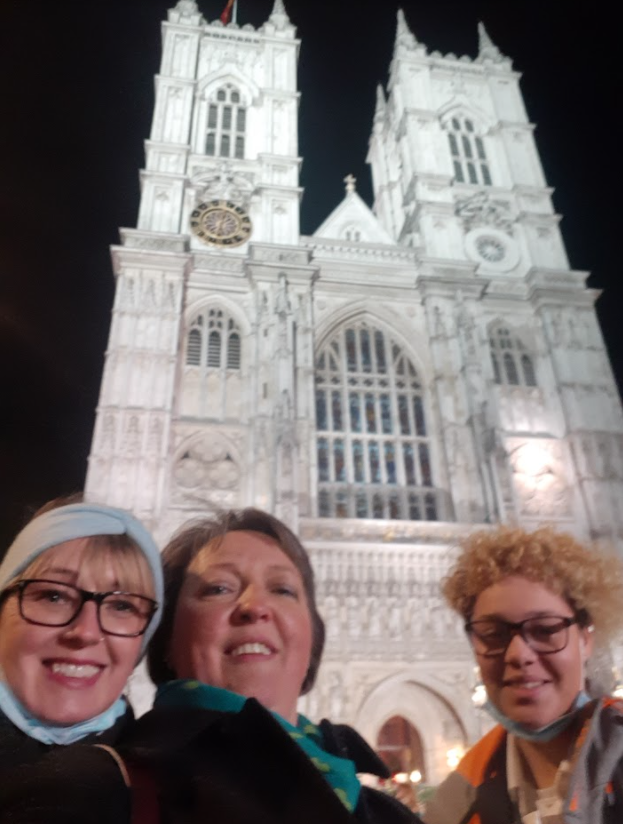